The nature trail at Veste Oberhaus

In the three-river city of Passau, the rivers Danube, Inn and Ilz have all cut their way into the surrounding bedrock of gneiss and granite, creating towering escarpments that are ideal for hiking, and with a wealth of flora and fauna to discover. The Oberhauser Leite is a section of a narrow valley of the Danube, which runs between Vilshofen in Bavaria and Aschach in Upper Austria. Today, the steep wooded hillsides surrounding Veste Oberhaus are located inside the flora-fauna habitat area "Donauleiten from Passau to Jochenstein", thereby forming part of the European nature reserve Natura 2000. Its purpose is the transnational protection of different types of valuable natural habitat. At the Donauleiten, it is primarily the habitats in the sunny, rocky areas and hillsides covered by mixed forest that are to be preserved.

Today’s magical mountainside, with its liana-covered trunks and fallen deadwood, used to be almost free of any vegetation. People up in the castle wanted to maintain a clear view to make sure that no enemy could approach unnoticed, and so that the building would seem as impressive as possible from afar. For around 100 years now, nature has been allowed to reclaim these steep hillsides.

In the 19th century, near the suspension bridge, the trail known as the Ludwigsteig – named after Prince Ludwig of Bavaria who later became King Ludwig III - was blasted out of the rock. Then, in the 20th century, the Oberhauser Leite was made even more accessible by the Bavarian Forest Society, which ran the first museum inside the Observation Tower at Veste Oberhaus.
The hillside forest with its steep rocky walls provides a perfect habitat for many plant and animal species. The mixed forests are home to Scots pines, sessile and common oaks, common hornbeams, fine woods such as ash trees and small-leaved limes, as well as various types of maples and elms. Species-rich shrubs, attractive for insects, have formed at the edges of bushes, walls and rocks. Soapwort, fescue, waxy bedstraw and mountain stone-parsley grow here, together with rare plants such as Boehmer's cat's-tail or Artemisia scoparia – and also wild ornamental plants such as Iris sambucina, wormwood, columbine and snapdragon. There are also different types of stonecrops on the rock face that attract a small and endangered butterfly species: Scolitantides orion.

The dominant lizard species at the Oberhaus is not the indigenous sand lizard, but an Italian subspecies of the common wall lizard. Strikingly slim, the species was released in Passau decades ago and has now settled in on a large scale. On sunny days the lizards can be seen soaking up the warmth on the rocks and walls of Veste Oberhaus. Different types of bats, smooth and Aesculapian snakes, brown owls and kestrels have also found a home at the fortress.

The legendary ‘Golden Trail’ also ran along here – a route along which many goods, especially the precious commodity salt, were transported to Bohemia during the Middle Ages. Today many hiking trails follow the historic sumpter paths through picturesque landscapes. 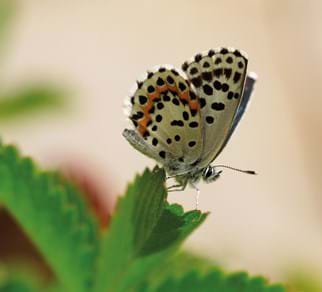