Veste Oberhaus, over 800 years old, makes history come alive in a unique way. Covering an area of 65,000 square metres, it is one of the largest and best-preserved fortresses in Europe. The Linde Battery view point and the newly re-opened Observation Tower offer the best views of the picturesque old town and of the confluence of the three rivers Danube, Inn and Ilz. St George's Chapel, with its unique and extensive fresco cycle displaying scenes of the legend of St George, is located at the heart of the fortress.

During the reign of the prince bishops, Passau was a major centre of power and trade and a magnificent residential town. In 1217, Bishop Ulrich II received the dignity of imperial prince from the later Emperor Frederick II. This now made the bishops of Passau not only the spiritual but also the secular rulers of the three-river town. In 1219, Prince Bishop Ulrich II laid the foundation stone for the castle "Georgsburg" on the Georgsberg, high above the Danube. For almost 600 years, the castle demonstrated power and strength, protecting the prince-bishops from their internal and external enemies. Even the citizens of Passau repeatedly rebelled against the ruling bishops, fighting for greater independence. All these attacks, however, were fruitless. The defiant castle withstood many threats over the centuries, and was renamed "Schloss Oberhaus" (Palace Oberhaus) during the Renaissance after the addition of state and reception rooms. From the 17th century, state-of-the-art fortifications were added, transforming the former castle into a fortress (Veste).

In the course of secularisation in 1803, the city of Passau, and Veste Oberhaus along with it, fell to the Kingdom of Bavaria. Napoleon Bonaparte, Bavaria's alliance partner, temporarily used Veste Oberhaus as a bastion in the war against Austria. From 1822 onwards the fortress was used as a prison for political detainees and also as a military gaol, feared as "Bavaria's Bastille". In 1932, the town of Passau finally took control of the fortress complex and established a museum there. As one of Germany's large municipal museums and central museum of the Bavarian-Bohemian-Austrian cultural region, the Oberhausmuseum presents diverse permanent exhibitions on the town's history and the Middle Ages, as well as alternating special exhibitions.
Today, alongside St Stephen's Cathedral, the fortress is Passau's most important sight and is home to the Oberhausmuseum, the youth hostel Kultur|Jugendherberge Passau, the city observatory and also the restaurant "Das Oberhaus". The Georgsberg, together with the Oberhauser Leite, forms a part of the European nature reserve Natura 2000. 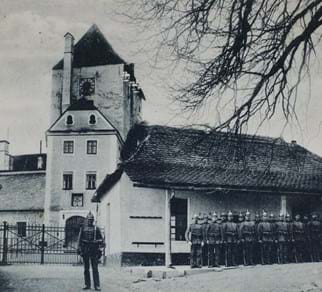